In an overwhelming show of union solidarity, IATSE members have voted to authorize a nationwide strike against film and TV productions if last-ditch negotiations with the AMPTP fail to produce a fair deal.

The vote – 98% in favor – now gives IATSE president Matthew Loeb indisputable authority to call a strike if he and AMPTP president Carol Lombardini fail to reach an agreement in the coming days.

Reflecting the frustration felt by below-the-line crew, the near total mandate is the union’s first nationwide strike-authorization vote, and brings the union one step closer to its first-ever nationwide strike. With the digital ballots going out early on October 1, it looks like the majority of IATSE members made their opinion known in the opening hours of voting, we hear. Voting continued until 8:59 PM PT on October 3.

Almost 90% of eligible guild voters in the 60,000-member bargaining unit cast a ballot, according to IATSE this morning. To give some perspective on the scale of that participation, that nearly 90% is about triple the turnout three years ago when members ratified their last contract.

“The members have spoken loud and clear,” said IATSE boss Loeb with the official vote result announcement coming a little later than its expected 11 AM PT launch. “This vote is about the quality of life as well as the health and safety of those who work in the film and television industry. Our people have basic human needs like time for meal breaks, adequate sleep, and a weekend. For those at the bottom of the pay scale, they deserve nothing less than a living wage.”

“I hope that the studios will see and understand the resolve of our members,” Loeb went on to say Monday. “The ball is in their court. If they want to avoid a strike, they will return to the bargaining table and make us a reasonable offer.”

Before making the vote result public, the union chief told the AMPTP of where the members stand now. In communicating to the Lombardini-led organization, Loeb “emphasized the need for the studios to adequately address the union’s core issues.”

AKA – the ball is really in your court, don’t drop it.

With this new but not unexpected state of affairs, the AMPTP responded to the strike authorization vote by taking a slightly low-key approach. The studios, streamers and networks’ reps said that it “remains committed to reaching an agreement that will keep the industry working. We deeply value our IATSE crew members and are committed to working with them to avoid shutting down the industry at such a pivotal time, particularly since the industry is still recovering from the economic fallout from the Covid-19 pandemic. A deal can be made at the bargaining table, but it will require both parties working together in good faith with a willingness to compromise and to explore new solutions to resolve the open issues.”

The union also took to social media this AM to make sure everybody knew what muscle the metric gave them.

There actually are two contracts at issue: the Hollywood Basic Agreement, which covers 13 West Coast studio locals, and the Area Standards Agreement, covering 23 locals outside Los Angeles. Under the union’s electoral college-style voting rules, each local gets so many delegate votes, according to their size. For a local to pass a strike authorization, at least 75% of those voting must vote “yes.”

If that threshold hadn’t been met, all the local’s delegate votes are counted as “no.” A simple majority of the delegate votes in the bargaining unit determines the outcome.

IATSE Preparing Its Members For Possible Strike Or Lockout

Loeb has said that a strong turnout will send a “clear decisive message” to management and strengthen his hand at the bargaining table – a show of solidarity to let the companies know that the members are willing to walk out over what many believe to be basic human rights: meal breaks; reasonable rest; secure pension and health benefits; and significant raises for the lowest-paid among them, some of whom make only a few dollars an hour more than minimum wage.

“We are fighting to ensure that the most powerful media corporations on the planet treat the film and tv workers who produce their content with basic human dignity,” the union has said.

In seeking strike authorization, Loeb told his members: “We are at a stage where the employers have made this struggle about power, not reason. Therefore we are initiating a strike vote to authorize me to call one if necessary. It is crucial that every member understand the seriousness of this matter and return their ballot in favor of the strike vote. A clear decisive message will be sent.”

“Throughout the bargaining process,” the union has said, “the AMPTP has failed to work with us on addressing the most grievous problems in their workplaces, including:

• Consistent failure to provide reasonable rest during meal breaks, between workdays, and on weekends.

• Workers on certain ‘new media’ streaming projects get paid less, even on productions with budgets that rival or exceed those of traditionally released blockbusters.”

Along with 100s of members of Congress, and top tier Tinseltown stars, Hollywood’s other unions have all expressed support for IATSE. 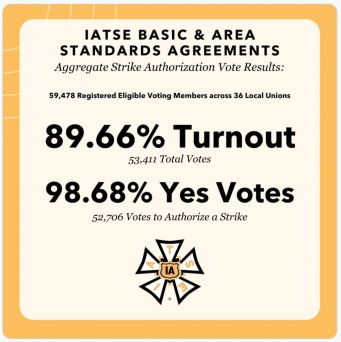 Prices subject to change.  All transactions and prices must be verified and approved by Samy's DV & Edit before shipping.
We are not responsible if a price is incorrect due to typo, misprint, or incorrect rebate deadline.